Long Ago, In a Galaxy Far, Far, Away 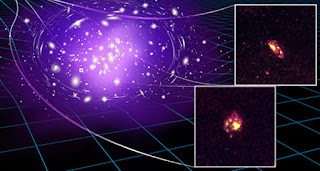 By viewing this galaxy, we are able to look further back in time than anyone has looked before. It is like viewing an ancient fossil of the universe frozen at a particular time. No one knows what this galaxy looks like at the present time. It has had 11 billion years to change and grow or shrink. Astronomers believe that this may be one of the very first spiral galaxies that came to be.

Looking at this from a theological perspective, we see that God is continually in the creative mode: 11 billion years ago, as well as today. I say today because even as you read these words lava is pouring out of a volcano in an ocean somewhere and is adding mass to an island. Somewhere in the dusty nebulae of the universe, giant orbs of rock and sand are slowly condensing into larger and larger masses until they suddenly explode into new stars. The immensity of creating a universe is unfathomable to our minds. Yet God has left enough clues to inspire awe in those who look for and trust in the Creator God.

Who has measured the waters in the hollow of his hand,
or with the breadth of his hand marked off the heavens?
Who has held the dust of the earth in a basket,
or weighed the mountains on the scales
and the hills in a balance?
Who can fathom the Spirit of the Lord,
or instruct the Lord as his counselor?
… God sits above the circle of the earth.
The people below seem like grasshoppers to him!
He spreads out the heavens like a curtain
and makes his tent from them.
… those who trust in the Lord will find new strength.
They will soar high on wings like eagles.
They will run and not grow weary.
They will walk and not faint.

May we trust in the mighty Lord who creates galaxies and islands, stars and eagles.

Posted by Keith Shields at 8:11 PM