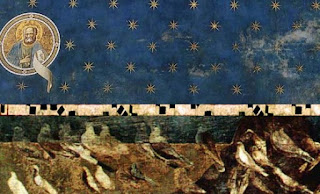 To me, religion seems very much like music. No one would argue that music is the opposite of science. No one would expect a scientist to reject music, simply because it is not a collection of empirical facts organized into a body of theory that generates testable hypotheses. No one would ask if music is scientifically accurate or if music is less true than science. Those kinds of comparisons are meaningless….

When I hear arguments about which is truer, religion or science, the wrangling seems pointless to me. It's like a baseball team suddenly leaving the ball field, charging into an art gallery, and yelling, "You're not playing baseball!"  To which the only answer could be, "Well, uh, no." Or say a bunch of art historians accuse the ball team, "You're not studying art!"  Well, duh ... They are different activities, with different rules and aims. Baseball players can be interested in art history; art historians can be baseball fans—these are simply not mutually exclusive. But they are different….

When you drop a big rock, it doesn't take faith to believe that it's going to be pulled toward the center of the earth, and you'd better move your foot out of its way. If the existence of God, and the correctness of a particular theological description of God were like that, then religion would stop being about faith.

- An interview with Mary Doria Russell
Posted by Keith Shields at 5:32 AM No comments:

Of Cats and Bells 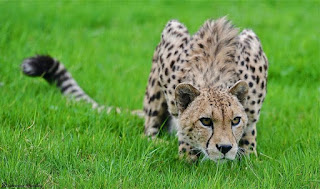 Today, I saw a house-cat hunting a squirrel. The cat crept up on the unsuspecting creature, carefully trying to get within range of a giant leap and an unleashing of claws and teeth. One could see thousands of years of instincts and intuition, passed down from ancient ancestors, coiled up in the body of this domesticated cat. Something told me this cat was exceptionally good at hunting. Even the fact that he would set his sights on a squirrel was laudable. A squirrel that is capable of quickly climbing fences and trees in a flash is not easy prey. What made this vignette sad was the fact that the cat wore a bell. No matter how hard the cat might try to creep up on its target, a slight movement of the bell would give away the position of the cat and alert its quarry. The owner was likely tired of the cat bringing home fresh kills to the house. Cats will do that you know. They are proud of their accomplishments and seek approval from those that love them. The cat may not be hungry, but some ancient instinct stirs in its mind and calls the cat to hunt. Some would accuse the cat of killing for sport. I do not think we should readily jump to that conclusion. Who knows what rare minerals or amino acids may be lacking in the body of this cat. Perhaps it is a specific hunger that drives it to crave this most ancient meat. Or perhaps it is the “call of the wild” inside this cat – a wild side that cannot be tamed – that calls to its nose and nervous system.

How sad to be caged without a cage. How sad to feel the pull toward something for which it has been made, with barriers that work against the fulfillment of purpose. There is a bigger story here.

How many people may be living a similarly caged life - caged by an almost imperceptible bell that seeks to keep them from their true calling? I do not speak of selfish goals or desires that enhance the individual. I speak of the person that each of us was designed to be. Those who think there is no design should stop reading here. Those who believe we are a product of chance driven by internal cravings for personal profit will be disappointed by the conclusion of this post. I speak instead of the very design of each person, the gifts and talents placed in our bodies and minds by one who has known us before we were conceived (Jeremiah 1:5; Psalm 139:15, 16; Isaiah 49:5). I speak of the thousands of years that have come and gone before, leading to a moment in history for which God has ordained us for the collective purposes of the world as it is today. Without a picture of who God made each of us to be, we will forever be pacing the cage; forever battling the barriers that keep us from our true calling. Even the cat is driven by a will to enhance the fortunes of his family that carry its genes into the generations to come, how much more has God made each of us for improving the future of humans and the welfare of others around us? How many of us might agree with the sentiments of Bruce Cockburn’s song when he says,

I pray that each of us might seek our true calling and not an image we wish others would believe. May the barriers that keep us from the things to which our God calls us be shattered and torn away - like the bell I removed from a cat’s collar. 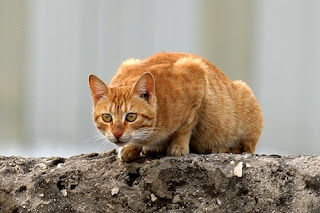 [1] “Pacing the Cage;” Bruce Cockburn, The Charity of the Night, http://cockburnproject.net/songs&music/ptc.html
Posted by Keith Shields at 9:30 AM No comments: 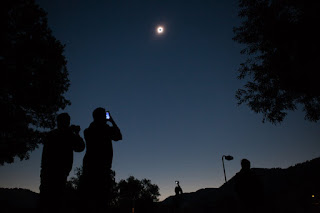 Annie Dillard went to see a total eclipse of the sun in 1979 and wrote about it in “Total Eclipse,” published as part of her book, Teaching a Stone to Talk. She speaks of the terrifying nature of a total eclipse and says that “Seeing a partial eclipse bears the same relation to seeing a total eclipse as kissing a man does to marrying him.” She describes the eeriness of totality and the awe it inspires. One can tell that, for her, it was a profoundly moving experience. Then, in the last paragraphs she speaks of walking away from the hill on which she and her husband had watched the eclipse.

“…when the total eclipse ended, an odd thing happened.
When the sun appeared as a blinding bead on the ring’s side, the eclipse was over. The black lens cover appeared again, back-lighted, and slid away. At once the yellow light made the sky blue again; the black lid dissolved and vanished. The real world began there. I remember now: We all hurried away. We were born and bored at a stroke. We rushed down the hill. We found our car; we saw the other people streaming down the hillsides; we joined the highway traffic and drove away.
We never looked back. It was a general vamoose, and an odd one, for when we left the hill, the sun was still partially eclipsed—a sight rare enough, and one which, in itself, we would probably have driven five hours to see. But enough is enough. One turns at last even from glory itself with a sigh of relief. From the depths of mystery, and even from the heights of splendor, we bounce back and hurry for the latitudes of home.”

The last two sentences of the article speak of more than just her experience of the eclipse. Dillard is one who sees the world in all its glory and has described it well for others in the books she has written. She knows of mystery, splendor, and glory. She also knows that we humans do not live in experiences of rapture forever. We spend most of our time in the mundane world of home. “One turns at last even from glory itself with a sigh of relief. From the depths of mystery, and even from the heights of splendor, we bounce back and hurry for the latitudes of home.”

I am one who is fortunate to work at a job in which I am paid to live in the world of glory, mystery and splendor. I get to interpret God, the mysteries of the universe, and creation to a world that is weighed down by expense records and balance sheets. Dillard says, “It can never be satisfied, the mind, never…. the mind wants to know all the world, and all eternity, and God. The mind’s sidekick, however, will settle for two eggs over easy.” Most of us live in the day-to-day of eggs and jobs and marriages and kids. We only briefly think about eclipses, theology, creation, and the mysteries of the universe. We are too busy working for that next meal of “two eggs over easy.” Most of the time, we are more comfortable in the world of eggs and expense records. Then, occasionally, the sun is blotted out from the sky and we consider our place in the world. Like ancients who believed that a wolf had bitten a chunk out of the sun, we wonder at the complexities of our world and are reminded of things we had not thought about for some time. We are faced with the size of the moon relative to our earth and to our sun. We are reminded that our universe is full of stars and moons and planets and things beyond this earth. Suddenly the “two eggs over easy” seem insignificant considering the bigger questions of how we got here and where we are headed. But it only lasts a moment. The total eclipse is over and “From the depths of mystery, and even from the heights of splendor, we bounce back and hurry for the latitudes of home.”
Posted by Keith Shields at 7:09 AM No comments: