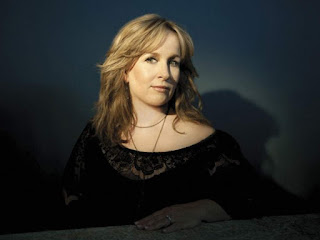 Gretchen Peters writes songs that tell stories and offer insight into the human condition. “Five Minutes” is an example of a song that tells the story of a broken and flawed woman.

I gave her hell when she came home this afternoon
Mascara runnin' down her face
Seems like history repeats itself, and it ain't up to you
And in five minutes
Your whole life can change

Andy he's good to me, and I can see it in his eyes
He'd love to take your place
But somethin' deep inside me just withers up and dies
To make love to him and only see your face

There is so much I like about this song, but perhaps my favourite is the ambiguity in the line that says, “Most nights I come home from work and I pour a glass of wine, sometimes it's three or four before I stop.” We get the impression that there is a problem here. Through the rest of the song, we see history repeating itself in her daughter and we see both women drawn to men who are not good for them. They are lost and need to find a clear direction in their life.

From my Christian worldview I can’t help but think of flawed women in the Bible and how Jesus sees them and shows love toward them. Perhaps the woman in “Five Minutes” is a bit like the Samaritan woman in the fourth chapter of the Gospel of John. Both women seem to be searching for something more and looking in all the wrong places. The human condition is difficult. We are prone to wander from the better paths and stray so easily into destructive paths. There seems to be so little time in life to ask the important questions and find the true path and so we muddle on in the way we have always lived. Perhaps even the author of “Five Minutes” is searching for something more.

“…those who drink the water I give will never be thirsty again. It becomes a fresh, bubbling spring within them, giving them eternal life.” - Jesus (John 4:14).

Posted by Keith Shields at 9:47 AM No comments: Links to this post

Dry Bones and the Spirit 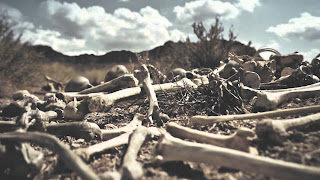 In Ezekiel 37:1-14 recounts one of the most important prophetic visions of the Bible. The vision takes Ezekiel to a “plain near a settlement of exiles at Tel Abib.” Ezekiel was prophesying at a time when the people of Israel were in exile. The Babylonian people had overcome the nation of Israel and scattered the people among their empire.

This message here, is a message for exiles. They were literally exiles who had been removed from their homeland and placed in the lands of the occupying nation. We too are exiles of another kind. We are citizens of the Kingdom of God living as exiles in a land that is opposed to the values of our Kingdom/nation. So, this message is a message for the people of Israel and a message for us as well.

The original Hebrew of the passage makes it clear that these are dry, scattered bones, not skeletons.  It suggests that these bones are truly scattered and dis-jointed and it has been a long time since they have been alive. And so, when God asks Ezekiel if they could possibly live again, the human answer would be “No!” This is a hopeless situation from a human perspective. But Ezekiel responds appropriately with something like, “you know, because you are the creator.” Ezekiel, much like Job, at the end of the book of Job, knows how to respond to God: “God, you alone know the answer to that question.”

This puts Ezekiel in a position to be used by God. God tells Ezekiel what to say and he tells the bones to get ready because God is going to make them come to life. Flesh, and muscle, skin, and breath will come into these bones and they will rise up again.

Then sinews form, then muscle or flesh, and finally skin. I wonder if this too had a sound-track? I wonder if it sounded squishy, gooey, and slappy.

After all of this flesh, muscle, and skin formation, they are still just bodies lying on the plain as if they had been slain in a great battle. Think of this, all of the internal organs must be there, all of the biochemical processes that must go on in a living body are ready to go. But the hearts are not beating and there is still no life in these bones and bodies until God gives them life. They are still dead bodies.

And so Ezekial prophesies again and calls upon the four winds to blow the breath of life into these still dead bodies. God’s breath comes into these bodies and they stand up and become a mighty army of God. The word wind here is an obvious reference to the Spirit of God, what we would call the Holy Spirit.

God is communicating some very important things here.
·       First of all, it conveys the creative power of God. The same power that was at work at the creation of the universe is at work here.
·       Secondly, when we die, it does not matter if we are put in the ground in a coffin, burned to ashes, or scattered to the wind, God can put us all back together again. We can be disintegrated into molecules and God can put us back together at the final resurrection of the dead. He knows where all of our bones and molecules go.
·       Thirdly, the bodies can be all put back together and have all of their rightful chemistry restored, but they are still not animate. They are still not alive until God makes them alive. God is the author of life and there is something elusive about the nature of life. Scientists have studied life and understand something of how living things work. But life is something other and requires God’s creative animation and his breath.

Isn’t this just a bit like us today? We look at the Christian landscape across Canada and we lament. We are tempted to lose hope in our God. But God has other plans for his church. The bride of Christ will be brought to life again.

Just as our bodies must be enlivened by this mysterious quality we call life. Our institutions, churches, and programs are lifeless bodies, maybe even dry bones, until the Spirit of God enlivens them. God has given us the Holy Spirit to make us alive and make the church alive.

You see, “there is a message of hope for those who have lost all grounds for hope…. It speaks to us of a God who can achieve the impossible.”
(Buttrick, George Arthur, ed. 1956, 267)

One commentator puts it this way,
“The Spirit lies beyond all that can be seen and measured. Its most apt symbol is the wind which is astir all about us but which is all the while invisible. … The Spirit is not ours to command, but is given when we are faithful. Like the wind, the Spirit blows where it will. … There are no limits on what God may do; at any moment he may break in and transform our present situation; therefore let us serve him according to our knowledge, leaving it to him whether he will continue the discipline of failure or transform our frustration into his marvelous success.”
(Buttrick, George Arthur, ed. 1956, 267-270)

Acts 2 talks about God’s Holy Spirit enlivening people and giving them new life.
Acts 2:16-18, 21
… what you see was predicted long ago by the prophet Joel:
‘In the last days,’ God says,
‘I will pour out my Spirit upon all people.
Your sons and daughters will prophesy.
Your young men will see visions,
and your old men will dream dreams.
In those days I will pour out my Spirit
even on my servants—men and women alike—
and they will prophesy….
everyone who calls on the name of the Lord
will be saved.’

Is that our experience? Are we today, sensing God’s Spirit poured out in us, his people?
Acts 2:32, 33
“God raised Jesus from the dead, and we are all witnesses of this. Now he is exalted to the place of highest honor in heaven, at God’s right hand. And the Father, as he had promised, gave him the Holy Spirit to pour out upon us, just as you see and hear today.

Acts 2:38-40
“Each of you must repent of your sins and turn to God, and be baptized in the name of Jesus Christ for the forgiveness of your sins. Then you will receive the gift of the Holy Spirit. This promise is to you, to your children, and to those far away—all who have been called by the Lord our God.” Then Peter continued preaching for a long time, strongly urging all his listeners, “Save yourselves from this crooked generation!”

Acts 2 reminds us of our constant need to repent and assess what we are doing with our lives. Nowhere does the Bible say to repent of the past once and for all. This is a continuous process.

Ezekiel tells us that the things we build must be enlivened by his Spirit. So, it is in our own lives, in our own churches, in our own ministries, we must ensure that we ask for and leave room for the Holy Spirit to enliven things. Do we actually expect the Spirit to show up or do we simply build more structures or pour on more human effort? If we build programs and structures and don’t ask God to make them live, then we have truly created a “zombie church.” It would be a church that walks around and does things but is not truly alive. What a horrible, ugly result that would be.

This truly requires us to rely upon the Holy Spirit in all that we do. Lauren Daigle, a contemporary gospel singer has a song in which she speaks of Jesus who is still rolling stones. Take a listen to the words and read them on the screen.

All at once I came alive
This beating heart, these open eyes
The grave let go
The darkness should have known

Today, I pray that God who rolled away the stone from the grave of Jesus, might roll away the stone that keeps us from being open to his Spirit in our lives.

Posted by Keith Shields at 8:50 AM No comments: Links to this post