Living in a World of Turmoil 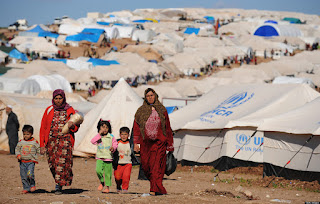 How will we respond when the world is in turmoil; when Syrian refugees are flooding European countries and seeking shelter in North America; when oil is $42 a barrel and people are losing their jobs; when Paris and Belgium are locked down; when travelers in the United States are warned not to fly? Do we live as functional atheists or do we "take captive every thought to make it obedient to Christ"[1]? I am now speaking to those of us who claim to be followers of the first century Rabbi, and Son of God, Jesus. If we truly believe in him, and follow what he taught, then we will recognize that "in him all things hold together."[2] We will not get caught up in the fear of the day. We will not be tossed about by every human argument about the way to solve these crises. We will have our pattern in Jesus. He will be our example and our teacher for dealing with daily life. Jesus tells us to "seek the Kingdom of God above all else, and he will give you everything you need."[3] Those of us who live as Christians in the world need to take seriously these words of the "author of our faith."[4] God still "reigns above the nations, sitting on his holy throne."[5] "Let us run with endurance the race God has set before us."[6]

[1] For though we live in the world, we do not wage war as the world does. The weapons we fight with are not the weapons of the world. On the contrary, they have divine power to demolish strongholds. We demolish arguments and every pretension that sets itself up against the knowledge of God, and we take captive every thought to make it obedient to Christ. (2 Corinthians 10:3-5 NIV)
[2] The Son is the image of the invisible God, the firstborn over all creation. For in him all things were created: things in heaven and on earth, visible and invisible, whether thrones or powers or rulers or authorities; all things have been created through him and for him. He is before all things, and in him all things hold together. (Col. 1:15-17 NIV)
[3] “Look at the lilies and how they grow. They don’t work or make their clothing, yet Solomon in all his glory was not dressed as beautifully as they are. And if God cares so wonderfully for flowers that are here today and thrown into the fire tomorrow, he will certainly care for you. Why do you have so little faith?
“And don’t be concerned about what to eat and what to drink. Don’t worry about such things. These things dominate the thoughts of unbelievers all over the world, but your Father already knows your needs. Seek the Kingdom of God above all else, and he will give you everything you need.
“So don’t be afraid, little flock. For it gives your Father great happiness to give you the Kingdom.
“Sell your possessions and give to those in need. This will store up treasure for you in heaven! And the purses of heaven never get old or develop holes. Your treasure will be safe; no thief can steal it and no moth can destroy it. Wherever your treasure is, there the desires of your heart will also be. (Luke 12:27-34 NLT)
[4] Hebrews 12:2 (NASB)
[5] For God is the King over all the earth. Praise him with a psalm. God reigns above the nations, sitting on his holy throne. The rulers of the world have gathered together with the people of the God of Abraham. For all the kings of the earth belong to God. He is highly honored everywhere. (Psalm 47:7-9 NLT)
[6] Therefore, since we are surrounded by such a huge crowd of witnesses to the life of faith, let us strip off every weight that slows us down, especially the sin that so easily trips us up. And let us run with endurance the race God has set before us. We do this by keeping our eyes on Jesus, the champion who initiates and perfects our faith. Because of the joy awaiting him, he endured the cross, disregarding its shame. Now he is seated in the place of honor beside God’s throne. (Hebrews 12:1,2 NIV)
Posted by Keith Shields at 7:04 AM No comments:

Rest in the Grace of the World