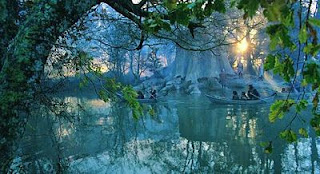 “There is such a place as fairyland - but only children can find the way to it. And they do not know that it is fairyland until they have grown so old that they forget the way. One bitter day, when they seek it and cannot find it, they realize what they have lost; and that is the tragedy of life. On that day the gates of Eden are shut behind them and the age of gold is over. Henceforth they must dwell in the common light of common day. Only a few, who remain children at heart, can ever find that fair, lost path again; and blessed are they above mortals. They, and only they, can bring us tidings from that dear country where we once sojourned and from which we must evermore be exiles. The world calls them its singers and poets and artists and story-tellers; but they are just people who have never forgotten the way to fairyland.”
― L.M. Montgomery, The Story Girl

Posted by Keith Shields at 6:40 AM No comments: Links to this post 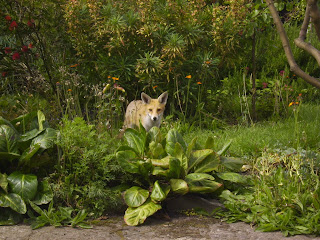 As I walked to the repair shop to pick up my car, I noticed a roadside sign for the local community theatre group. They were performing Hansel and Gretel. I thought about this story and silently wondered why a group would choose this play to perform in Calgary at this time of year. As a kid, and then later as a parent, I had never liked this story. It is the story of two children lost in the woods who look foolish because they did not create a reliable system that would allow them to find their way home. We might ask why the parents were not held accountable for allowing them to wander off. Then there is the encounter with the witch, a woman whose goal is to pop the two waifs into the oven and cook them up for a meal for herself. It is so horrifying that I can’t believe it is part of a story meant to be read to children. Why would anyone want to tell this story?

The answer, of course, lies in why we tell any stories to children. Certainly, some are predominantly a source of entertainment, but even entertaining stories can contain an ethical moral; most fairy tales do have an explicit or implicit moral. What is it that the story of Hansel and Gretel is teaching? The major message of the story seems to be that the world is a cold, cruel place filled with things that have the potential to “eat us up.” It tells us to be vigilant and ready to outwit the cruelty of this world. Unquestionably, if that is true, it is a message that must be told in whatever fashion adults and children will be able to hear. If the world is full of evil witches, dangerous stalkers, and corporate thieves, if we can outsmart the witches of this world, then we need to tell this story over and over.

But what about another “fairy tale” - a true one. Once upon a time there was a man and woman placed in a garden by an all-knowing Gardener. The Gardener loved them and wanted them to have a wonderful life in the garden he had created especially for them. He gave them much liberty and very few rules, but even the few rules he gave them proved to be too much for the two people. They broke the rules so completely that the Gardener had to send them away from the garden. Yet, even as he sent them away into a world inhabited by thorns, thieves, and witches he created a way back to the garden. If the couple, or any of their children, ever wanted to return to the beautiful garden, all they had to do was follow his son. The Gardener’s son was a great gardener who could tend even the wildest of soils filled with rocks, thorns, drought, and plant pests. Even in the most difficult of conditions, he could create works of art. He could have stayed in his father’s Grand Garden, but instead he chose to go out into the place where the man and woman had been sent, redeeming lives and patches of soil. There the son worked in obscurity creating small patches of beauty in a world filled with darkness and painful circumstances. The Gardener’s son waited patiently for the children of the garden couple to join him in the redemption process and win back a broken world.

For many of us that is more than just a fairy tale. It is the nature of how we see life. Yes, the world is full of evil witches and those who would take advantage of us at every turn; but there is an answer at hand. The answer is not simply using our wits to outsmart a hungry witch. We all know that the tricksters, false leaders, and pushers who promise candy but give death, can never be completely outwitted or avoided. On our own, there will always be a huckster who will catch us off guard long enough to do great damage in our lives. We need more than ourselves. We need a community all on the same path, following the “way back.” We need the Gardener’s son.
Posted by Keith Shields at 7:26 AM No comments: Links to this post 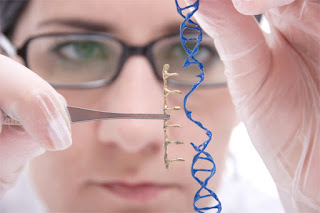 CRISPR is a relatively new term that describes new discoveries and new technology in the world of genetics. CRISPR stands for Clustered Regularly Interspaced Short Palindromic Repeats and refers to short repetitions of base pair sequences in bacterial genomes which naturally occur as part of bacterial genetic defence mechanisms against invading viruses. These CRISPR sequences are used by bacteria to store genetic memories of past viral invasions that might otherwise lead to the destruction of the bacterial cell. Next to a CRISPR sequence is a segment of DNA that represents part of a viral genome from a previous encounter with that virus. It is like the bacteria store a photo of all of the viruses that previously tried to kill them and then recognize that virus when it shows up again. Cas9 enzymes search through the cell for these potentially dangerous pieces of DNA and then make RNA copies that will guide the Cas9 enzyme to the dangerous viral DNA and cut it in two so that the virus is defeated. If a new virus shows up, Cas9 first makes a copy of the new viral genome and inserts it in between the CRISPR sequences so that it is ready for the next time this virus tries to invade.

This biological system within the cells of bacteria has been exploited and used by genetic scientists to create a tool that can be used to edit the genome of humans and other research subjects. So, you may also hear people refer to CRISPR technology as it is used for gene editing in medicine and research. Cas9 and other CRISPR enzymes recognize strings of DNA about 20 base-pairs in length and can therefore be engineered to be very specific and targeted. This has allowed researchers to load Cas9 with a specific sequence that can then target where they would like to cut out a piece of DNA, say to knock out a gene and determine what that gene does, knock out a rogue gene that is malfunctioning, or to cut out a defective gene and replace it with a properly functioning gene. Recently, scientists in China used this technology to engineer cells to potentially treat lung cancer. In this case, CRISPR technology was used on immune cells taken from the patients and a gene was disabled. The protein, PD-1, normally slows down or ends an immune response (something that is normally needed but exploited by cancer cells) and so researchers inactivated it so that the body might continue to mount an immune response against the cancer cells in the lungs. This represents the first time CRISPR technology has been used in such a way in human trials.

As one can readily see, this technology has vast implications and has the potential to solve many medical problems. CRISPR could repair the mutation that causes Cystic-Fibrosis in a family’s genetic makeup, or repair the gene that causes genetic forms of colon cancer such as Adenomatous Polyposis Coli (APC). It also brings with it the possibility of ethical challenges. It could be used to substitute the gene for blue eyes in place of the gene for brown eyes (or the opposite exchange); or it could be used to substitute a gene that codes for average height for a gene that codes for exceptional height (really handy if you are trying to build an Olympic basketball team). Taken to logical conclusions, CRISPR technology could be used to build a super-race of humans and even create genetic enhancements that cannot yet be imagined (think real life X-Men mutants). Scientists in China have already published data showing that they had successfully modified the DNA on nonviable human embryos. They could have just as easily been working on viable embryos.

In a future where diseases can be eradicated and enhancements can be made, what becomes of the average person with defects or no enhancements? Should we concern ourselves with this? A few years ago, the movie Gattaca attempted to engage audiences in questions related to such issues. Now, nearly 20 years later, genetic technology has advanced to nearly the point predicted in that movie. What will another 10 years of medical and technological advance look like in our world? How might we prepare now for the ethical questions yet to come?

For further explanation and discussion, read this article on the modification of DNA in nonviable human embryos.
Posted by Keith Shields at 12:51 PM No comments: Links to this post