Houston, We've Had A Problem

In an article by Rich Schlentz entitled “Engage ‘Em or Lose ‘Em—It’s That Simple,” the author speaks of corporate America.

April 14, 1970. Apollo 13 was two days into its mission when an explosion caused the spacecraft to lose oxygen and electrical power. At that point, John L. Swigert, the command module pilot, uttered the now famous quote, “Okay, Houston, we’ve had a problem here.” Although the crew on that Apollo 13 flight were some of the most highly trained astronauts in the world, it didn’t take much skill or education to recognize the problem at hand. Thanks to a loud explosion, their dire straights were simple to recognize.

So it is today within corporate America. There has been a large “explosion.” Only this time it has gone virtually unnoticed! When it became clear to the Apollo 13 crew that there was a serious threat to their lives, they sprang into action. They quickly responded by working collaboratively and with purpose to achieve a clear objective: make it home alive! The same cannot be said for a large portion of American companies who have decided to ignore the explosion of employee disengagement. There is no response, no springing to action. Rather there is the status quo of employees remaining isolated in corporate silos, receiving emails from their supervisor’s mandating that they do more, better, faster, with less. How can it be that in the middle of national crisis, it’s so difficult to recognize our own dire straights?*

I would like to extend this analogy. Not only has corporate America “had a problem,” but American and Canadian culture in general has a problem and the Canadian church in specific has a problem. We are sitting in the midst of it, we have heard the explosive loss of oxygen and energy in the church but it has not rallied our churches to action. The average person in the church sits disengaged; unwilling or unable to respond to the dire straits of our situation. We keep waiting for things to "get back to normal." When "the trouble with normal is it always gets worse."^

As Darrell Guder has said.

This is a time for a dramatically new vision. The current predicament of churches in North America requires more than a mere tinkering with long-assumed notions about the identity and mission of the church. Instead, as many knowledgeable observers have noted, there is a need for reinventing or rediscovering the church in this new kind of world.#

Let us pray that God will build His church and that the gates of hell shall not stand against it.

^The Trouble With Normal, 1983, words and music by Bruce Cockburn. Published by Golden Mountain Corp. (BMI)

#Darrell E. Guder, editor, Missional Church: A Vision for the Sending of the Church in North America.
Posted by Keith Shields at 7:15 AM No comments: Links to this post

Stuart Murray spoke at the Renov8 Congress in Calgary. One of the interesting things he said was this.

If we serve a God who loves beetles enough to create 350,000 different kinds, can't we have a few more types of churches? Stuart Murray, Director of Urban Expression, UK: http://www.urbanexpression.org.uk

Posted by Keith Shields at 10:19 AM 2 comments: Links to this post 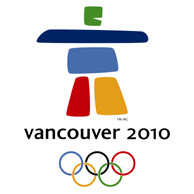 The inuksuk (also spelled inukshuk and plural inuksuit) is one of the symbols of the Vancouver 2010 Olympic and Paralympic Winter Games. In the Canadian north inuksuit have been used for many purposes. They are used to show directions to travellers, to warn of impending danger, to mark a place of respect, to mark a cache of food, or to look like a person and help in the hunting of caribou. They are a quiet message given to those on a journey.

We are all on a spiritual journey; and like the Inuit of the north, this journey is through a harsh land. We need an inuksuk along the way to guide us in this spiritually barren place.

The billboard message of our culture today is shouted to us from every store, every television commercial, and every news story. The predominent message says, "There is no God; there is no meaning to this world; the best that you can do is simply enjoy life." But might there be another message spoken softly in the inuksuit of life? If we listen carefully we might hear God's quiet whispers from the sign-posts along the road, "I Am; I am not silent. The universe is not meaningless. I have a plan for you." 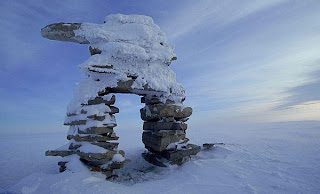 Posted by Keith Shields at 8:08 AM No comments: Links to this post

Postcard from a Friend

My friend and pastor Rick Scruggs wrote a great blog post a few weeks ago. I thought I would share it with you here.

Not all learning comes from books. I’ve been learning some things from my granddaughters. As a parent I soon came to realize that God teaches up plenty from our kids and as a husband it didn’t take me too long to realize that God had plenty to teach me through my wife and the journey of marriage. But grandkids have caught me a bit off guard. I guess I presumed that because we had raised our own children and arrived at the point where they had left the nest and were soaring well on their own that our days of learning much from children was over. But then came Kaiya and more recently Rylee and a whole new era of learning has commenced!

The learning I’m referring to isn’t about new toys or the most recent kid’s TV programs or how to employ an improved diapering system. It isn’t even about mastering the technology of “skype” so we can see them while we talk with them. No…the real learning, the important learning is about how they affect our hearts.

During these “sabbatical days” I’ve had more time to spend with them which means of course that I have gotten more attached to them. In the days leading up to their move to Vancouver they lived with us for a week and as a result saying “goodbye” became that much harder. The house is now so much quieter…the toys are never underfoot and the tupperware cupboard stays neat and organized behind the door instead of all over the floor…I can actually get things done without interruption…when I leave to go somewhere no one cries because they can’t come with me and I can actually read the paper instead of The Barnyard Dance when I sit down. But…there are no squeals of joy…no cries of “Bampa”…no lifted arms…no one crawling into bed with us in the morning or peeking out from around the corner while playing a game of “boo”.

So as I sit in my quiet and well ordered room and write this blog I’m reminded of a few things that this “refresher course” is teaching me. I’m reminded of how important children were to Jesus and of his warning that unless we become like these little ones…these vulnerable, dependant, exuberant kids…we cannot get into his Father’s Kingdom. How is that when we are so smart, so savvy, so well experienced, so cosmopolitan? I’m reminded of how they love to be held and cuddled and played with and how much we grandparents love those moments and I think about how much God longs to take our hand during a walk, have us sit on his lap while he reads us some story that is far below his IQ level. That closeness that develops between grandparent and grandchild is a reflection of the closeness that God desires with us! And the joy at watching them learn to walk and talk and master all kinds of new skills…I’m sure that God has those same moments of joy as he watches you and I make progress in our efforts to become just like him.

More painful insights came when Kelly and Sarrah moved to Vancouver a couple weeks ago. And while they moved for good reasons, to work with a new church plant there, the geographical distance reminds me of another painful reality. What must it be like for God when his kids move away from him? How does he feel when the ones he has loved, the ones who have professed their love and commitment to him choose to put distance between themselves and him? Perhaps we would like to believe that God is somehow devoid of such trivial emotions but if he indeed created us in his own image I think he must feel some of the pain that such separation inevitably brings…a similar sadness and longing to that which we have felt these last few days since our granddaughters moved away.

These “grandkid lessons” have also taught me more about empathy. I resonate with those grandparents who have experienced these exact same feelings. I hurt more deeply for parents who have lost custody of their children or even more dramatically those who have lost a child or children to death in some manner. Compared to these “tearings” my lessons have been slight and temporary but non-the-less my empathy has been sharpened.

So we look forward to a few more trips to Vancouver and becoming much more proficient at skyping and God willing, perhaps even a few more grandchildren in the years ahead! And I’ll try to remember that God is always willing to teach me new lessons, even in the midst of disappointment and painful separations.

Posted by Keith Shields at 7:54 AM No comments: Links to this post

If I Were You

And if I were You . . . if I ran this town
The righteous would be sitting pretty
And the rotten would come tumbling down
They’d beg and they’d wrangle for a second chance
I’d say, "Sorry boys, but I just can’t"
Yeh, that’s what I’d do
If I were you

But You know me, I’m just a man
Of unclean lips and unclean hands
Some of the thoughts I have
Make me want to run and hide
I don’t know much but I’ve observed
You’ve never treated me like I deserved
Your loving arms are always open wide

If I were You . . . a catastrophe
What in the world kind of world would this world be
I guess I’ll take my place
Wrapped in amazing grace
Let You be You
That’s what I’ll do

Posted by Keith Shields at 8:08 AM No comments: Links to this post