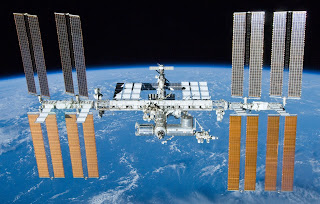 (Click on this thumbnail picture for a larger image)

The International Space Station (ISS) flew over my home a few minutes ago. When you know where to look it is easy to pick out of a clear sky one or two hours before sunrise or one or two hours after sunset. The ISS circumnavigates our planet in approximately 90 minutes and appears from earth as a fast-moving light traveling from a westerly direction to an easterly direction. Today, at 5:39 am, it was very close to the centre of the sky, halfway between north and south. An app such as Sky Guide helps me keep track of ISS flyovers and the location of planets in the night sky. You can also go to the ISS Astroviewer to get an image of the present location of the ISS.

It is fascinating to think of the six astronauts racing overhead at 7.66 km/sec. Presently, the crew consists of three Russians (Roscosmos), two Americans (NASA), and one French (ESA); under the command of Robert Shane Kimbrough (NASA). This crew represents Expedition 50 and has been assigned to study several human biomedical research questions. NASA states that the purpose of this mission is to “investigate how lighting can change the overall health and well-being of crew members, how microgravity can affect the genetic properties of space-grown plants, and how microgravity impacts tissue regeneration in humans.”. The crew are the test-subjects in their research work. As the present mission nears completion, the crew have been in space for 120 to 150 days and a crew change is scheduled to occur in early May, 2017.
Posted by Keith Shields at 6:23 AM