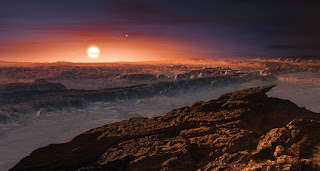 There has been much speculation in recent days about the possible discovery of a habitable planet in the Proxima Centauri solar system. Just as our star, called the Sun, has a collection of planets in orbit around it, the closest star to our Sun may have planets in orbit around it. In the August 25, 2016 edition of Nature, a team of researchers presents evidence suggesting that a planet with mass slightly larger than Earth (1.3 times the mass of earth) is cozied up to the Proxima Centauri star in a tight 11.2 day orbit. Think about how fast a year would go by on that planet. (Personally, I am glad that I was born on Earth rather than this planet since an orbit like that would make me more than 1,800 years old.) The new planet has been given the uninspiring name “Proxima b.”

Now, of course, many other planets, have been discovered around other stars in our universe and so Proxima b is not novel in that sense. What makes this planet particularly notable is the fact that it might exist within a narrow window of conditions known as the habitable zone. Initial evidence suggests that the temperature on the planet might be suitable for liquid water on the surface. It may have an atmosphere and there may be portions of the planet on which it may be a reasonable temperature for life (as we know it) to survive. The tight orbit suggests that it may be tidally locked[1] (meaning that it always shows the same face to the sun – as our moon always shows the same face to the earth) and so one side of the planet is in perpetual day and one side perpetual night. This is certainly a strike against it being a habitable world.

Of course news like this caused quite a stir and led to a lot of conjecture about how we might visit or colonize Proxima b. But, let’s make a few things clear, in astronomical distances, this potential planet is very close: only 4 light years away. This means that a photon of light traveling from Proxima Centauri takes only 4 years to get here. Some stars are so far away that they take thousands or billions of years to get to us. But, using todays propulsion methods which can achieve speeds of 0.005% of the speed of light, if you launched a very fast ship toward Proxima b, it would get there in about 80,000 years[2]. So, don’t let anyone fool you into booking your next vacation on an exotic planet in the Proxima Centauri system. You won’t live long enough to get there and your rocket would not have sufficient fuel to make the trip. Other, faster, modes of transportation have been proposed but those are still in development and right now are closer to science fiction than true science.

Still, a science nerd can dream. Such discoveries do spur the imagination. Imagine if we could find a way to travel at 20 percent of the speed of light and get there in a few decades. Could this be a place where humans might extend our reach and colonize another planet? What might we find on such a planet? Or, are the distances just too great to ever get a good look at Proxima b?