Europa and the Promise of Life 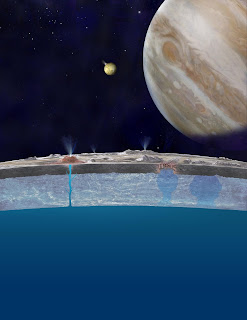 Just how thick is the ice on Europa? Europa is a water-ice encased moon orbiting around Jupiter and scientists are beginning to ask questions about how they might determine the thickness of this ice. We know that there is water below the ice because geysers that spew water into the tenuous atmosphere above have been detected. It is speculated that microbial or even higher eukaryotic life could exist in the water below and so there is great interest in cracking through the frigid crust to see what lies beneath.

NASA has a mission scheduled for the 2020s that would include a flyby and possibly seismic measurements.[1] Lately, it has been suggested that an empty propellant tank could be sent hurtling onto the ice while the flyby-craft could measure the ripples created by such an impact. Slower propagating waves would indicate thicker ice; faster waves would indicate thinner ice.

The international community must weigh in on the ethics of littering another moon surface with our cosmic space junk, even if the purposes could be considered noble. One must also consider that any propellant tank that originates from a DNA rich and biologically fertile world like earth, could inadvertently introduce life (or at least DNA) to a potentially fragile ecosystem. Might Earth-life compete with primitive life of another form and disrupt the natural progression on that pristine world? Might our cosmic litter disrupt the fragile ecology of other-worldly biology?
[1] Science News, “Seismic experiment might reveal thickness of Europa’s ice,” 2015-05-25; https://www.sciencenews.org/article/seismic-experiment-might-reveal-thickness-europa’s-ice
Posted by Keith Shields at 4:35 PM