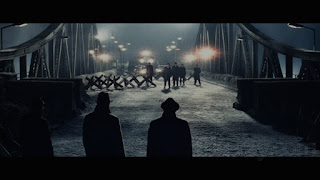 Most everyone wants to do good things in this life. We want to feed hungry children, sit with someone during their last hours of life, help someone become employable, or release hostages from torture. Some would want to do these things without public recognition, while others would want the fame and acclaim for wonderful things achieved. One of the most popular movie themes is the premise of the man or woman who is “in over their head” and likely to die in some situation but manages to escape destruction and rescue others at the same time. This premise appeals to our sense of doing good beyond our normal capacities. One such movie is Bridge of Spies (2015)[1], written by Matt Charman, Ethan Coen, and Joel Coen, and directed by Steven Spielberg. (The rest of this blog contains spoilers. You may want to watch the movie and then come back to the blog.)

It tells the story of James B. Donovan, an American insurance attorney, who was known as a negotiator for spy exchanges. Around 1962 he successfully negotiated the release of Francis Gary Powers, an American spy-plane pilot, and Frederic Pryor, an American student in Berlin, in exchange for Rudolf Abel, a convicted Soviet spy. After his success, Donovan was asked by American President John F. Kennedy to negotiate the release of 1,113 prisoners following the unsuccessful Bay of Pigs Invasion. He secured the release of 9,703 men, women, and children: in over his head and achieving more than was normally possible.

Most of us will not have the opportunity to do the things that Donovan did. We may never be asked by anyone to do some outstanding act of bravery or intelligence. These sorts of things often come unexpectedly to those who do not ask for them; but, what could I do to help others? What could you do? There are people who need our help. There are children who need someone to pack them a lunch for school because their parents do not send them with a lunch. There are those who are trapped in dangerous parts of the world who need a sponsor for their status as refugees. There are still others who, for various reasons, could use our help.

What am I waiting for; what are you waiting for; a call from the Prime Minister? The opportunities are all around us. They may never make a movie about us; but we can still be a powerful influence for good.
[1] http://www.imdb.com/title/tt3682448/
Posted by Keith Shields at 6:02 AM