What is it made of?

As a curious person, I often ask the question, "What is that made of?" Today's blog will take us on a journey as we ask this question about plastic. One of the simplest forms of plastic is polyethylene. The chemical formula for this molecule is (C2H4)nH2. The type of polyethylene varies with the value of n.

(You can click on any of these images for another view.) 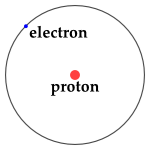 Neutrons are made of two "up" quarks and one "down" quark while protons are made of one "up" quark and two "down" quarks. Electrons are made of . . . well . . . electrons. At this point, we believe electrons to be indivisible quantum particles, just like "up," "down," and other types of quarks. On the other hand, another theory is that all of these elementary particles would be better modeled as vibrating strings. But we will save the discussion of that theory for another day.

Researchers at the Large Hadron Collider (LHC) in Cern are discovering that quarks can interact and form intermediary groupings of two, three, and four quarks. Recently a particular particle containing four quarks was discovered by analyzing the products of multiple collisions in the LHC. So, the next time someone asks you the component parts of something, ask them how far down they would like to go. This universe continues to inspire awe in the one who created it.