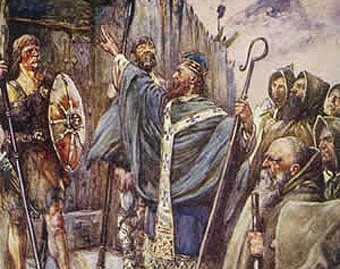 Saint Columba is widely known as one of the first missionaries to Scotland and certainly Scotland's most famous missionary. He preached to the fierce Pict people in Northern Scotland. These were the people with tattoos all over their bodies who made intimidating screams when they went into battle. They were frightening people to whom Columba chose to speak the Gospel message.

In the book, Life of St. Columba, written by Adomnan of Iona, there is a story that is either a miracle that truly happened or a legend that teaches a truth. It is hard to distinguish which it is. But around 563 AD, Columba set out to convert King Brude, one of the known leaders of the ancient Picts. He knew that if he could win over this king it would lead to the success of bringing over the whole nation to the worship of the one true God. So he visited the pagan king Brude at his fortress near modern-day Inverness. The King, influenced by the Druids in his court, had specifically instructed that the gates be closed against Columba. When Columba arrived at the king's fortress he found the gates locked and denying him entrance. So Columba made the sign of the cross on the gates and the gates are said to have miraculously opened by themselves. King Brude was so impressed by this that he opened his home and he opened his soul. King Brude became a devoted follower of Jesus Christ.1