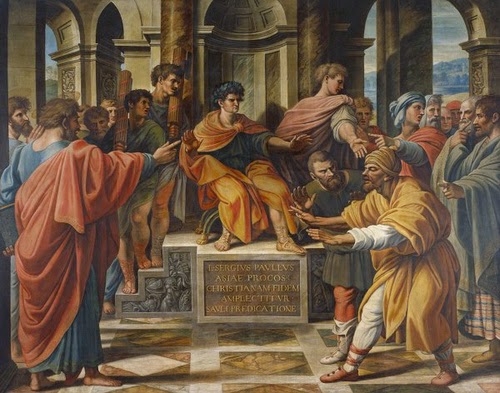 A few days ago I wrote about a miracle or legend in the life of Saint Columba. Today, take a look at this passage from Acts 13:6-12. Here we read about a miracle that happened when Barnabas and Paul chose to do the work to which God had called them. Opposition came but God overpowered this sorcerer and gave them access to the governor.


[Barnabas and Paul] traveled through the whole island until they came to Paphos. There they met a Jewish sorcerer and false prophet named Bar-Jesus, who was an attendant of the proconsul, Sergius Paulus. The proconsul, an intelligent man, sent for Barnabas and Saul because he wanted to hear the word of God. But Elymas the sorcerer (for that is what his name means) opposed them and tried to turn the proconsul from the faith. Then Saul, who was also called Paul, filled with the Holy Spirit, looked straight at Elymas and said, “You are a child of the devil and an enemy of everything that is right! You are full of all kinds of deceit and trickery. Will you never stop perverting the right ways of the Lord? Now the hand of the Lord is against you. You are going to be blind for a time, not even able to see the light of the sun.”

Immediately mist and darkness came over him, and he groped about, seeking someone to lead him by the hand. When the proconsul saw what had happened, he believed, for he was amazed at the teaching about the Lord.