The May 17 issue of Science News features a series of articles about Europa, the fourth largest moon of Jupiter. Europa is perhaps the most interesting moon in our solar system. At roughly two thirds the size of our own moon (with a mass of just 0.0080 times the mass of earth) it is still a small world; but what makes it interesting is its potential for life. Whereas Io is covered in volcanoes (over 400 active on the surface) and Callisto and Ganymede are covered in equal parts of silicate rock and water-ice, Europa is completely covered in frozen water. Recent observations suggest that beneath this thick crust of ice lies a vast ocean; and, there is also much conjecture that it could be possible for life to exist in this ocean.

Arthur C. Clarke, the British science fiction writer, imagined an ocean with intelligent life on Europa in his Space Odyssey books (particularly 2010: Odyssey Two and 3001: The Final Odyssey). Clarke is no light-weight when it comes to scientific predictions, having written scientific papers in 1945 that proposed geostationary satellites before the first one was put in place in 1963. Could Clarke have been prophetic about life on Europa? If pressed about his stories of Europa he would surely say that writing of intelligent life was purely imagination; but that simple microbial and bacterial life would be much more of a scientific possibility.

Today, there are scientists working to test hypotheses about microbial life living in thermal vents in the ocean floor of Europa. If such life could be detected it would be a dramatic discovery that would revolutionize our concepts of life in our solar system and in the universe. Would such life be carbon based? Would they replicate by sexual reproduction? Would they contain deoxyribonucleic acid (DNA)? If they did have DNA would they use the genetic code of the majority of life on earth, the mitochondrial DNA code, or a novel genetic code? Such questions would immediately spring to the minds of scientists and would soon be on the lips of people at Tim Hortons and Starbucks shops around the world. No, this is not some sort of nerdy exaggeration, people would find such things fascinating if such a revolution occurred. Of course the theological ramifications would be significant. The Copernican revolution taught us that the earth is not the astronomical centre of the universe and that the earth revolves around the sun, not the other way around. This had to be considered as humans thought about their place in the universe. Could humans still be a special part of God's creation if they were not located at the geometric centre? The exobiological revolution of finding life on another planet would lead to an exotheological revolution in which we would again need to consider our place in God's economy. We would have to ask, "Is life on earth really all that special?" If life could develop on two separate worlds within one solar system, how many more life forms might there be in the entire universe? Might some of them have developed communication with one another? Could they communicate with us? Might they pray to our same God? Might they pray to another god? All of these questions and more would become much more significant the moment life was detected elsewhere.

The articles in Science News suggest that the ability to fully test the hypotheses is still ten to fifteen years away. I hope to live to see the day when there are ice-drills on Europa as we seek the answers to these interesting questions. 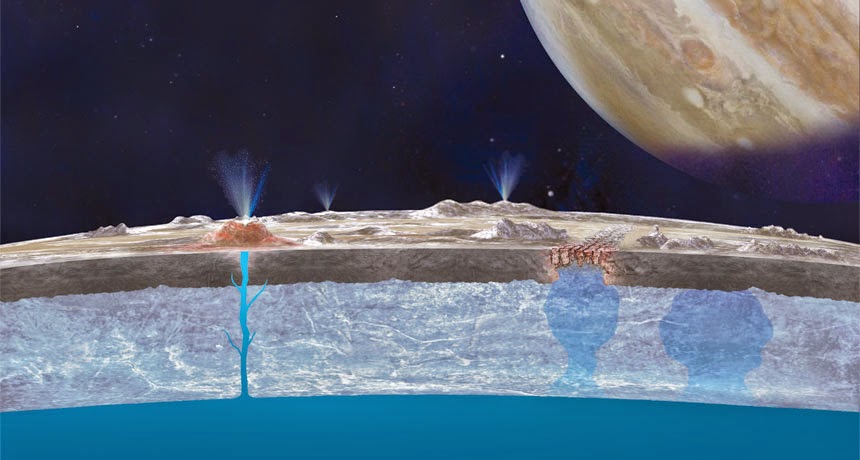 Posted by Keith Shields at 4:56 PM