I am feeling the need to take a trip to a place where I can see a large number of stars at once. Every once in a while I get this sense and I have learned to listen to this call of my spirit. I find I need to periodically make time for seeing the stars. It renews my sense of awe and mystery. It reminds me how small we are. It reminds us that this planet on which we reside circles around a star not unlike the thousands we see dappling the sky. It reminds me that God has a much bigger plan than just my little life.

Seeing the stars of course requires that I get away from the light pollution of large cities. It is not as easy as it once was but it is still possible to find places with a decent view of the cosmos. In the rural community in which I grew up we readily saw stars, northern lights, and other stellar majesty on any clear night. But 40 years later light pollution threatens to obliterate the view in the countryside as well. Now that I live in Vancouver I will plan to take a short trip up the north coast on a clear night. There, using the mountains to block out the glow of the highly populated lower mainland, I should be able to get some good views. It will be good for my soul.

The value of staring at the heavens in awe, as most of us used to be able to do, is tremendously under-rated. You can feel that sense of wonder and smallness; the inexplicable understanding that there is so much more that we cannot understand. There is a huge difference between a culture that is humbled by the stars and one which lets you think you are one.1 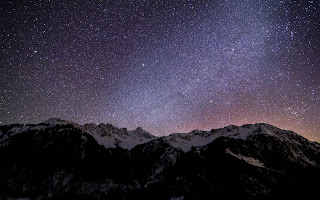