It is often recounted that Ernest Shackleton ran an ad in the paper seeking men who would join him on a Trans-Antartic expedition. The ad is thought to have said, "Men Wanted: for hazardous journey, small wages, bitter cold, long months of complete darkness, constant danger, safe return doubtful, honour and recognition in case of success." The story goes on to state that 5000 men responded. 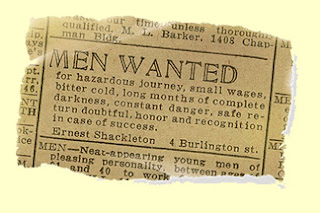 It makes for a great inspirational story; but it is almost certainly apocryphal. The photo above representing the ad that some say appeared in the London Times shows an American spelling of the word "honour."

Yet, people still use this quote to inspire people to do great things when doing those great things may be at great risk to their personal safety. Check out the last slide of this TED talk by Bill Stone for a recent use of this quote.

In some ways, it is easier to ask people to give up everything on a one time gamble. Our culture has predisposed people to consider the big risk that could result in death or tremendous fame and fortune. Maybe it has always been this way. The explorers of the past did find people who would join them on expeditions with low probability of success. I suspect that very few went on to fame and fortune. What members of the Shackleton team are remembered today? The question is, which is harder, giving up all on a one time gamble or living with discipline every day of our lives as we daily deny ourselves and reach toward a common good? The parent who chooses to stay at home and care for small children knowing that they may be giving up chances for promotion goes namelessly into history while others go on to greater glory. The person who could take a business class flight but opts to fly economy for the sake of others will likely not be noticed. The administrative assistant who makes things flow smoothly so that the busy executive can make the deals could have trained to make the big deals herself but has chosen a lifestyle that allows for Sabbath and family and church. Do we wish to be remembered for attempting a monumental task (succeeding or failing) or do we wish to accomplish great things with the likely result that we will not be remembered at all? I think I am reassessing some of my own priorities as well.
Posted by Keith Shields at 1:17 PM