Six and a Half Years of Curiosity 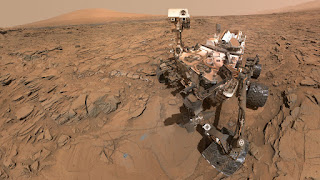 About six and a half years ago on August 6, 2012, I got up early to watch NASA TV as they broadcast the landing of the Curiosity Rover on Mars. I remember the significant tension of this particular landing because NASA was employing some new technology that had never been used before. They used the usual heat-shield to brake through the upper atmosphere, then deployed parachutes to slow the lander even more. But, what was novel about this landing was the use of a “sky crane” which NASA engineers dubbed, "seven minutes of terror." The Curiosity Rover was much heavier than other craft that had been landed on Mars and so the usual airbag crash would not protect the heavy rover well enough. The sky crane was a rocket-powered descent device that separated itself from the Curiosity Rover with a bridle of three cables and an umbilical cord which allowed the sky crane and rover to communicate with each other. After separating from the rover but remaining attached by the cables, the sky crane fired its rockets to allow for a gentle descent to the surface. Once the rover was gently landed on the ground of Mars, Curiosity communicated this via the umbilical cord so that the sky crane could cut the cables and fly far away to crash elsewhere on the surface of Mars. Won’t humans one day have fun when we finally do travel to Mars and see the various landing and crash sites of such vehicles as the sky crane, Mars 2 (a Russian craft that crashed hard on Mars and did not respond to calls from earth), Viking 1 and Viking 2 (NASA landers that did manage to send back data to earth), Mars Polar Lander (a failed NASA lander), and Spirit (active from 2004 to 2010) and Opportunity Rovers (active 2004 to 2018 when a dust storm forced it into hibernation) two more successful NASA landings?

What I find amazing is that the Curiosity Rover that I sat watching as it landed in 2012 is still active on the planet, roving over the surface and doing science. And of course, Opportunity Rover holds the record so far for the longest rover mission on the Red Planet. These technological feats of engineering stagger the mind. Once a rover has successfully landed on Mars it must then survive dust-storms that foul moving parts and cloud over solar power systems. Yet these rovers grind on in the cold. The average temperature on the planet is estimated to be around −63 °C, with highs of 20 °C and lows near −153 °C. To be sure, it is not a very hospitable place for a rover.

Yet NASA and other space agencies continue to plan more missions to Mars. Hope Mars 2020 is a United Arab Emirates launch scheduled for July of 2020, Mars 2020 Rover, a NASA venture, will collect samples that will be returned to earth by a later vehicle, and the Exo-Mars Rover 2020 which is a joint effort of the European Space Agency and the Russian Roscosmos Agency, will also land in 2020. Japan and China also currently have plans to land landers in 2020 and the Indian Space Research Organization plans to land on Mars in 2022. It seems that all of the nations of the world are involved in this space-race to begin the process of colonizing Mars.

NASA, in collaboration with SpaceX and other private space companies have plans to put humans on Mars by 2033. Other countries around the world are making their own target dates for when they anticipate landing humans on Mars. In the 15 years from 2020 to 2035, what will this kind of competition and cooperation look like? Will this contribute to world peace or add fuel to many world-wide conflicts. Let us pray that the space race may truly be used to satisfy human curiosity rather than human greed. Here's to many more years of Curiosity!
Posted by Keith Shields at 5:09 PM

Space exploration is without a doubt a very interesting and intriguing conversation. I remember watching The Martian with Matt Damon a few years ago and enjoying this idea of growing ridiculous amounts of potatoes in a shack surrounded by space grade vapour plastic. I am no scientist and could not say whether that would be realistically possible. As I read through this post though I was arriving as the same conclusion asking the question if as a human race we could seek together to make an exploration of Mars more about discovering the vast mystery of the planet rather than a vast business transaction where eventually earths countries and powerful business leaders are seeking to make some sort of business profit out of the exploration. Prior to reading this post I read the "abstract" I'll call it regarding the blog site. In particular I am referring to the aspects talking about our relationship to God as Father. As Christians we understand that Mars, just like earth, is another God created mystery. I asked myself the question reading this post wondering if we would really be capable of looking at an exploration like this through the eyes of humble children seeking to learn about the mystery out of innocent curiosity? Or if like mentioned, would it become a war among the earthly powers for profit and resources? I myself find it fascinating to read even the little bits about the temperatures of Mars. My brain takes me to places such as the the 2018 science fiction movie Titan with Sam Worthington where a company scientifically evolves a group of people in order that they may survive the harsh conditions of a planet they were going to be sent to, among the group only one survives and goes, however he is no longer a human being. The question that arises for me is what measures would be taken to ensure the survival of the human species on the planet Mars if we intended to colonize it. The problem that the movie Titan identifies or asks of us is do we lose our humanity or must we become another species entirely to survive on another planet? It is my belief that with all of our technology that we are capable of not having to go so far as a science fiction movie such as Titan would propose, but it is still something that sparks my curiosity.