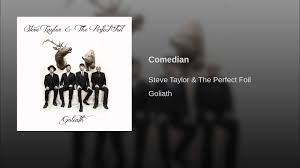 Some songs are so good it is almost irreverent to interpret the lyrics. Steve Taylor says that he worked twenty years on one of the songs on his Goliath album. There was not a week went by when he was not rolling this one around in his mind and coming up with better ways to say things. The result is astonishing. Not only are the lyrics an impeccable piece of poetry but the melody and the building of arrangement and presentation are highly emotive. I find that “Comedian” hits me at a number of levels and speaks to the challenges of being human and the mistakes we make as we take seriously the call to give honour and power and gratitude to the ultimate King and Lord of our lives.

Many have asked questions about what the song is about and Taylor has allowed the song to speak for itself without giving much interpretation. As with all art, the artist gives one side of the communication, and the one who appreciates the art allows it to speak to her or him and completes the other half of the conversation. With any form of art, what it impresses upon the recipient is a valid part of the exchange. Even when an artist did not explicitly intend for a piece to speak in a certain way, it may do just that in the life of the receiver.

I encourage you to listen to the song as you read these lyrics. Ask yourself, what does it do to your soul? After you have listened to the song and read the lyrics, I offer some of my emotions, understandings, and interpretations. They are certainly not the final word on this impressive work of art.

And when he's gone
Gone
Who gets the mic
If it's on?

And when they're gone
Gone
We'll need a new
Comedian

And when it's gone
Gone
It's open mic
Is this on?

It's been there so
Long
Please welcome back
The first, the last
Comedian

How this song affects me:

The puns throughout the song are subtle and sometimes hard to catch. They also cause me to pause and seek understanding. They have the effect of a “Selah” at the end of the line in a Psalm. “The saints came marching in this morning and they marched back out the door, wholly offended,” or were they “holy offended?” Thus, begin the questions in my mind. Steve Taylor has always been a controversial figure in church circles and in the recording industry. He is very much aware that he has wholly offended many of the holy, and not so holy, people in his life.

Court Jesters, a common person in the courts of Kings and Queens of the past, often over-reached and insulted the court in which they received their employment. Kings were known for allowing a jester to go so far and then throw them out (or worse). Taylor has a certain court-jester style about him in this song, and in his life. Sometimes he is going after the people of the court, sometimes himself, and sometimes his barbs are aimed at the very one who gives him life. There is mockery, confession, confusion, repentance, and shame in these lyrics.

I had to look up the concept of the “amen corner” to be sure I knew what it meant. One writer said that the “Amen Corner” is “the place where the most difficult and devout congregate.” Their “marching orders” get an official and collective “amen” even as they reserve the right to amend - so clever!

"I've learned to sign so the deaf can watch me speak." Is that a reference to film-making? Man shrugs and walks away.

Who is “the King of the One Liners?” Well, one might expect it is the song-writer and to some degree he does identify with this person, but more importantly, the “King of the One Liners” represents Jesus - in my opinion. The people of his time saw him as a great teacher and they loved his pithy stories and statements. But his punchline was that he would not be controlled by the preconceived ideas of the Scribes, Pharisees, or people. Jesus chose to lay down his life for the people rather than overthrow their Roman oppressors and no one knew what to do with this. Near the end, they cried out for his death. Taylor seems to be able to relate to the adulation, the “not being controlled,” and the cries for his death (or at least the death of his music).

Throughout the song, Taylor asks questions about who will ask the questions. Who will be the next comedian? He will not always be around to challenge the status quo and act the fool. Who will pick up the mic? “If it’s on!” “Is this on?” Can you hear me now?

“Man makes plans, God laughs,” is one of those statements that almost sounds biblical but is more accurately rabbinical. Its essential meaning is similar to what James 4:13-15 says.

“Look here, you who say, “Today or tomorrow we are going to a certain town and will stay there a year. We will do business there and make a profit.” How do you know what your life will be like tomorrow? Your life is like the morning fog—it’s here a little while, then it’s gone. What you ought to say is, “If the Lord wants us to, we will live and do this or that.””

If we fail to take God’s will into our plans, our's are foolish plans. All the plans I have for my future must be considered within the will of God and must be encompassed in his plans for my life. Otherwise we become foolish comedians and God laughs at our naivety.

As God laughs and our self-centred plans are frustrated, we might even become angry with God; but the feud with God cannot have a pleasant outcome for us, as he smiles at us with omniscience and forgiveness. Still we take up the feud and storm the stage where he and/or his followers have been given the mic.

After the anger comes the self-righteousness. Didn't I do this and that for you? Didn't I carry your cross? Or at least the light piece? Why haven't you given me all I want?

The white noise at the end of the song begs us to answer the question: “is it on?” The mic is clearly on. Who will pick it up and be the next court jester asking the important questions and poking fun at the “amen corner.” The mic will not be on forever. One day the King will draw a sword from his scabbard and cut the cord, or perhaps - cut the chord.

Posted by Keith Shields at 2:15 PM

It's "Amen Coroner" isn't it? Not "Amen Corner". That's what Steve has on his website sockheaven.net.

As I listen over and over to that portion of the song, I keep hearing “corner” but I might be wrong. Sock Heaven is a good resource for Steve Taylor lyrics, but it is maintained by Troy Davis, not Steve Taylor, and is not infallible. Many other lyric sites leave it ambiguous as “ner’s.” The impression I get as I listen is still directed toward the “Amen Corner” even if Taylor is giving us another subtle pun. So, my interpretation remains the same even though it may be different for you and other readers.

Thanks for reading and commenting. I trust that the rest of the article was enjoyable. Steve Taylor has given us some amazing lyrics and songs.

Hi Keith,
Just wanted to drop you a note and let you know you have a new follower of your blog, music, and who knows what else. I appreciated this piece on Comedian. I've been following Jesus for the past 34 years with varying degrees of success, but an unwavering belief that He alone has the words of eternal life. For some strange reason, I just discovered I really like Steve Taylor's music. That's fine with me. I love finding new music I love...even if it's decades old. As I write this, I have your music blaring through my headphones...No Hit Wonder...again.
Take care!
Doug

Thanks for the gracious words. It does a song-writer's heart good to think of someone rocking' out to their song. I will pass your comments on to the cowriter, Mike Charko. Also, thanks for reading my thoughts about the amazing song "Comedian." Many of us aspire to write an epic like this one day.

PS, I too have been following Jesus with varying degrees of success.