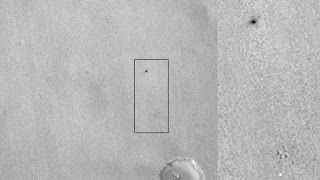 This week was supposed to be a week of good news for the Schiaparelli lander. It was expected that by this time, the Trace Gas Orbiter (TGO) would be relaying information from Schiaparelli to Earth and science experiments would be about to begin on the surface of Mars. The European Space Agency (ESA) did have success in inserting the TGO into orbit around Mars but Schiaparelli did not fare so well. Evidence points to a crash landing on Mars. ESA lost contact with the Schiaparelli craft shortly after its entry into the Martian atmosphere on October 19. ESA believes that two of three phases of the landing succeeded but that something went wrong with the third and final stage of the complex landing procedure.

What seems clear from the evidence gathered so far is that the hydrazine rockets fired early and did not fire long enough to allow Schiaparelli to slow to zero velocity at 2 meters above the surface. Instead, it is believed that the space-craft fell more than 2 km and landed with a velocity greater than 300 km/hr, crushing the delicate craft and perhaps causing it to explode upon impact. Images of the landing site, taken by the Mars Reconnaissance Orbiter (a NASA orbiter), show both the parachute and Schiaparelli on the surface with a larger than anticipated impact site for the spacecraft.

Meanwhile, the TGO is in its expected orbit around Mars and will go through a series of maneuvers in early 2017 to bring it into a low Mars orbit where it will begin its science missions. TGO will analyse the atmosphere of the planet looking for methane that may have been generated by life on the planet in some stage of its history. Methane could be an indicator of methane-producing bacteria that may have once thrived in water on the Martian surface thousands of years ago.

Despite the set-back of a crash landing, ESA will continue to work towards putting a rover on Mars in the year 2020. We look forward to much more Martian exploration in the years to come.
Posted by Keith Shields at 6:52 AM