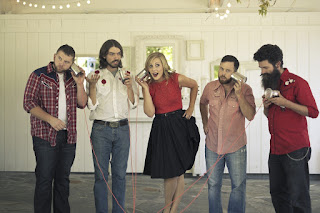 Looking back over the last 40 to 50 years, one of the areas of greatest technological change has been our means of communicating with one another. Future blogs in this series will discuss such technologies as the internet, cell phones, and social media. Today, I will let Nora Jane Struthers and her band, The Party Line, demonstrate one facet of technology and the social change it brought. They do this with the lyrics of their song, “Party Line.”

The concept of the “party line”[1] is well known to rural settings of the 1950s and 60s in Canada. In the Central Alberta farming area where I grew up, farms had telephone systems in which as many as two dozen farms would share one line and users were given a distinctive ring cadence for which they would listen. One long ring, followed by two short rings, and another long ring, was one such cadence and was the ring for which my family would listen. I remember, as a small boy, being shushed so that my parents could listen closely to distinguish the ring and whether or not the call was meant for us. Of course, people came to know other people’s ring cadences as well and we could tell who it was that would be picking up the call. If you wanted to know your neighbour’s business (and who didn’t) you could quietly pick up the receiver and listen in on another farm’s call. A click on the line was a small indicator that someone else had picked up. (Heavy breathing from a third party was a big indication.)

In the song “Party Line,” Nora Jane and band are singing about the transformation that occurred when that “electric wire” of the telephone began to connect home to home. She laments that “no one ever comes to call” and sit around on the “back porch,” to “chew the fat.” There are some things you just can’t see, smell, or feel through an electric wire.

Now we're all on the party line
I can't hardly get a word in edgewise
Everyone's on that party line
But no one ever comes to call
Why don't you call?

We used to chew the fat. Do you remember that?
Back when time moved slow as the pine tree sap
Seeping up through the boards right here on my back porch
You know you used to love the smell of the magnolias in the morning
Now you telephone and this don't feel like home
Without your foot tapping while I put the coffee on
And I can't see your smile through an electric wire

Now we're all on the party line
I can't hardly get a word in edgewise
Everyone's on that party line
But no one ever comes to call
Why don't you call?
[1] Wikipedia, “Party Line,” https://en.wikipedia.org/wiki/Party_line_(telephony); accessed 2016-08-27.
Posted by Keith Shields at 1:00 PM