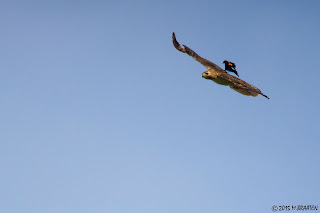 The wonders of God’s creation will never cease to amaze me. On three different occasions in two geographically distinct areas I have witnessed Red-winged Blackbirds riding on the backs of hawks. You have likely seen the phenomenon where smaller blackbirds are seen harassing larger hawks. Red-winged Blackbirds can be quite territorial and will work to protect their nests. Hawks, being carnivorous, are not opposed to eating smaller birds and particularly, young ones in the nest. The blackbirds will chase hawks away from their nesting area by flying at the large bird from above, thus avoiding the lethal talons and beak. They will peck at the hawk and generally cause enough disturbance to chase away the large predator.

A few of the little blackbirds get quite bold. They will actually land on the back of the large hawk and peck at his neck while riding at a position just in front of the hawk’s wings. It is the equivalent of an avian rodeo. The hawk will begin to fly more erratically in hopes of shaking the tiny bird off of her back but the blackbird can hang on for quite a while. It is also slightly reminiscent of scenes in the movie Avatar, where the residents of Pandora manage to ride on the backs of large winged beasts.

How did this behaviour develop? Did one little bird do this by accident and then realize he could impress his friends? “Watch this fellas! I'm gonna ride a killer!” Did the behaviour get passed around blackbird circles when they all went to their wintering grounds in California?

Watch for this behaviour the next time you are out in a marshy area with lots of blackbirds and hawks. You might just be rewarded by a glimpse of this comical looking performance.
Posted by Keith Shields at 10:04 AM