Conversations about driverless cars just got a little more difficult. Isaac Asimov's "Three Laws of Robotics" cannot help robotic cars in situations where they must choose between harm to passengers or harm to pedestrians. A recent article[2] in Science News includes the following graphic and explanation to illustrate the point. 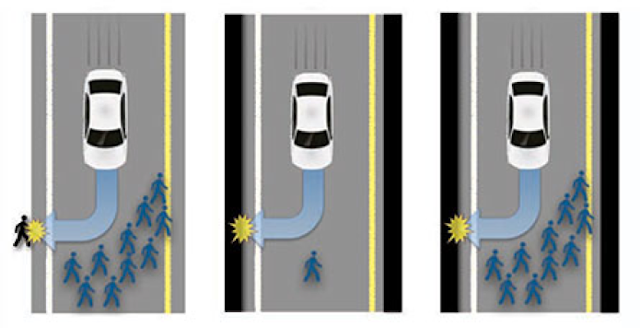 J.-F.Bonnefon et al/Science 2016
"Driverless cars will occasionally face emergency situations. The car may have to determine whether to swerve into one passerby to avoid several pedestrians (left), swerve away from a pedestrian while harming its own passenger (middle), or swerve away from several pedestrians while harming its own passenger (right). Online surveys indicate most people want driverless cars that save passengers at all costs, even if passenger-sacrificing vehicles save more lives."

Of course one might argue that, on average, humans are no better at such moral dilemmas. Perhaps the issue is that with a robotic car we know exactly what we will get. Programming will determine the choices a driverless car will make in any given situation, whereas humans are much less predictable and the choices they make are dependent upon the degree of altruism resident in the individual driver. Many times, in a moral dilemma, we do not know how an individual human will respond. Will they choose to sacrifice themselves for the sake of strangers? Will they sacrifice themselves and their child for the strangers? What about the scenario in which their pet would be sacrificed for the sake of unknown pedestrians? We may do surveys and get a statistically accurate average on the answers to these questions but we know that there would be outliers and unique decisions made at the spur of the moment. With robotic programming, the driverless car does not make a choice, it simply follows the program with which it was built. This puts the onus on the manufacturer rather than a driver or a car or a robotic brain. In a litigious society, this may be the problem that slows the progress of driverless cars.
[1] In 1942, the science fiction author Isaac Asimov published a short story called "Runaround" in which he introduced three laws that governed the behaviour of robots. https://en.wikipedia.org/wiki/Runaround_(story)
[2] “Moral Dilemma Could Put Brakes on Driverless Cars,” Bruce Bower, June 23, 2016, Science News, https://www.sciencenews.org/article/moral-dilemma-could-put-brakes-driverless-cars
Posted by Keith Shields at 6:24 AM