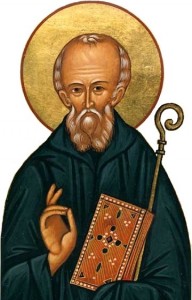 Today we celebrate the life of St. Columba who died on this day in 597 C.E.
Saint Columba, or Colm Cille, spread Christianity through what is now known as Scotland. He wrote several Latin poems and hymns, some of which have survived to this day.

High Creator, Unbegotten,
Ancient of Eternal days,
Unbegun ere all beginning,
Him, the world's one source, we praise:
God who is, and God who shall be :
All that was and is before:
Him with Christ the Sole-Begotten,
And the Spirit we adore,
Co-eternal, one in glory,
Evermore and evermore:—
Not Three Gods are They we worship,
But the Three which are the One,
God, in Three most glorious Persons :—
Other saving Faith is none.

All good angels and archangels,
Powers and Principalities,
Virtues, Thrones, His will created—
Grades and orders of the skies,
That the majesty and goodness
Of the Blessed Trinity
In its ever bounteous largesse
Never might inactive be;
Having thus wherewith to glory,
All the wide world might adore
The high Godhead's sole-possession
Everywhere and evermore.


— The Hiberno-Latin abecedarian hymn, Altus prosator, a sequence attributed to St. Columba, from Lays of Iona and Other Poems; English translation by Samuel John Stone.
http://www.eccentricbliss.com/2014/03/altus-prosator/

Posted by Keith Shields at 6:28 AM