The Shape of the Universe 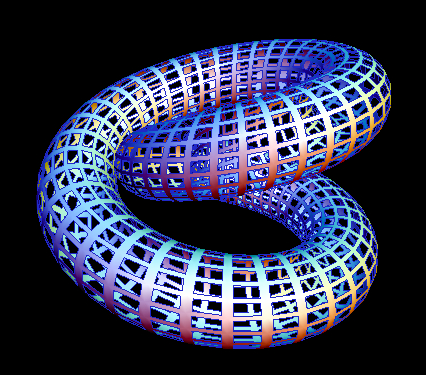 How does one describe the shape of an ever-expanding universe? It is not easy to imagine what it might look like. Neither was it easy for some to imagine a spherical earth. For many centuries, the best model for the shape of the earth was a flat disk. This model held sway for at least five centuries in the Common  Era (CE); and, even then, a spherical model was only adopted in certain Greek philosophical circles. Imagine for a moment how difficult it would have been to conceptualize that if you traveled west long enough you would arrive back at your point of departure. Returning to the shape of the universe, apply such imagination to its shape. What if someone told you that if you kept going in one direction in the expanse of the universe, you would one day come back to your point of origin? Would that be similarly hard to comprehend? That is precisely what would happen in the current best model for the shape of the universe. The model is represented by a toroid. It is sometimes described as a donut shape but a donut shape is only the simplest of the toroidal shapes. The shapes pictured in this blog also define toroids.

The best calculations by mathematical physicists tell us that the universe is close to completely flat and could fit on the surface of such a toroid. This is a shape that is definitely hard to conceptualize for very long. I think it must have been brief glimpses into the mysteries of the universe such as this that led Albert Camus to say, “Beauty is unbearable, drives us to despair, offering us for a minute the glimpse of an eternity that we should like to stretch out over the whole of time.” We can only hold such images in our minds for the briefest of moments before they escape us or drive us mad. Those who lived in a "flat disk world-view" must have felt the same. How could one hold onto this concept for more than a few seconds? It was outside of the experience of all people until a few brought back reports of strange journeys and new understandings of geography and geometry. Now, although we take it for granted that it can be done, few have circumnavigated the globe to prove the theory. I can only dream of what the experience might be like and only astronauts have a true, immediate, experience of circumnavigation. But, in my mind, momentarily, I can capture the mystery.