Some people have the ability to think beyond their own time and consider what the world might look like in generations to come. One such person that has recently caught my attention is Colonel Edwin "Buzz" Aldrin.1 Aldrin was the second person to set foot on the moon and has led a life of celebrity since that epic 1969 mission. He is a fascinating person and, in his 2009 biography, Magnificent Desolation, he is open about his personal struggle with depression and alcoholism following his NASA career. He is also outspoken about his Presbyterian faith and is known for having celebrated communion on the moon.

Aldrin has continued to invent and discover new concepts. In 1985, at the age of 55, he discovered an orbit which would allow an object such as a comet or spacecraft to cycle between the earth and Mars. Aldrin proposed that humans could take advantage of this orbit and insert a spacecraft (sometimes called the Aldrin Cycler) into this orbit that could carry men and women to Mars. The cycler would continually orbit between Earth and Mars with periodic close flybys of each planet. One complete orbit would take two and one seventh years, while the trip from earth to Mars would take around five months. Mars missions could rendezvous with the cycler at these strategic flyby points and personnel could ride the cycler between the planets. They would exit at the next close encounter. This would reduce the amount of rocket fuel needed to travel between the two planets as it uses the gravitational tugs of each planet in a gravity assist flyby. Take a look at this video that describes how the concept works.

From a science and technology perspective, it is a fascinating concept. Once the cycler was inserted into its orbit, the initial trips could be devoted to delivering materials to this neighbouring planet. Robotic missions could place living quarters, food supplies, and other things needed for the first missions with humans on-board. Imagine hitching a ride on an artificial comet safely protected from the cosmic rays of space. A rotating living space inside the cycler could generate an artificial, centripetal gravity where travelers could carry out experiments on scientific questions related to space travel as they spent five months on the journey to the planet. Then, when the travelers arrived they could explore the surface of Mars, set up a scientific station on the planet, and perhaps eventually colonize the planet.

The other aspect of this story that is also of interest to me is the mindset of "Buzz" Aldrin.  He is definitely looking toward the future with this proposal. He is now 83 years old and the project would not possibly get started before 2020. He is pioneering and seeking to contribute to something that will benefit future generations. Many times in business, science, and even the church, our vision is very short-sighted. If there is no benefit for our present or for our immediate future, we tend not to think about such things. I like reading about those who are dreaming and creating a vision for the future. We need more of these dreamers. Perhaps I can integrate some of Aldrin's spirit into the work I do. I will give some thought to how I can help build a better future for those who will come after me. 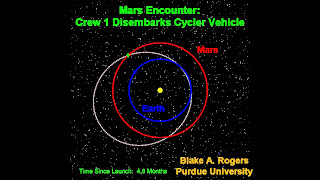 Posted by Keith Shields at 5:58 PM