I have previously written about amateur science that all of us can do as we observe the world around us. In that article I commented on crows that seem to have learned to do "crowish science" and "probability predicting" in order to get their daily caloric intake from their harvest of mussels. Of course, my science is amateur and based on observation alone. By saying that the crows were doing science, I assigned complex thought processes to these crows. In order to truly explain what is going on with the crows along the seawall of Vancouver we would need to set up appropriate experiments. I recently came upon a marvelous article about new developments in the science of animal behavior. I encourage you to read the entire article.

The article speaks of experiments designed to distinguish between "human-like insight" and "careful observation." It turns out that crows are not so much "doing science" but rather they are keen observers of the world around them. In some circumstances they can use their observational skills to notice that something they have done gets them closer to their goal. This is what is at work when crows find a way to get at a tasty bit of meat hung on a string below them and out of reach. 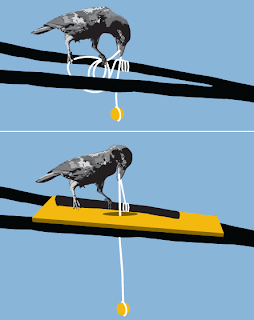 It is also at work when crows find a way to raise the water level in a tube so that the treat floating on top is accessible. This looks like real thinking; but scientific experiments suggest that it is just plain observation and repetition. The crows just pay attention. 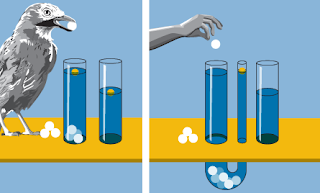 Regardless of what it is that is going on in the brain and actions of crows on seawalls or in the labs of scientists, the results are fascinating. The article goes on to speak of relatively complex tool construction and tool use that has been observed in crows. Next to humans, New Caledonian Crows may be the greatest tool makers and tool users on the planet. They are better at tool use than chimpanzees who, in some cases, cannot multi-task well enough to concentrate both on the skills needed to work the tool and the ultimate task toward which the tool is applied.

This article and other recent science on animal behaviour does make me wonder how many things separate humans and animals on the planet: tool usage, abstract thought, language, moral judgement, responsibility. How many of these might be the true elements of the imago dei found in humans?
Posted by Keith Shields at 3:37 PM