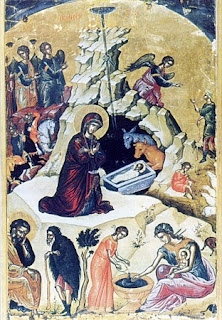 For as long as I can remember, I have wondered about the nature of the star studied by the Magi of the east; you know, the one they used to find their way to Jesus. There are many theories. Could the “star” be a comet, a planetary conjunction, a supernova, or some other celestial event of miraculous or natural origin? It had never occurred to me that the biblical narrative in the Gospel of Matthew might describe the miraculous appearance of an angel that guided these men of wisdom. This is exactly how the Eastern Orthodox Church understands this event. Perhaps the Wise Men first noticed a light far off in the sky that they assumed was a new star. Later, they might have found this star growing in intensity as it began to reveal itself as an angel on its way to visit them. The angel may have even spoken to them and given them further guidance or simply moved ahead of them like the ancient pillar of fire that Moses and the people of Israel followed. This treatment of “the star” leaves more room for the miraculous nature of the events surrounding the birth of Jesus. It is an important perspective to keep in the forefront. We all need to leave room for miracles in our lives.


Oh Little Town of Bethlehem:
No ear may hear His coming
But in this world of sin
Where meek souls will receive Him still
The dear Christ enters in

The Troparion of the Nativity:
Your birth, O Christ our God,
dawned the light of knowledge upon the earth.
For by Your birth those who adored stars
were taught by a star
to worship You, the Sun of Justice,
and to know You, Orient from on High.
O Lord, glory to You.

Works Cited:
“Feast of the Nativity of our Lord and Savior Jesus Christ;” Greek Orthodox Archdiocese of America; accessed 2015-12-14; http://www.goarch.org/special/listen_learn_share/nativity
“Star of Bethlehem;” Wikipedia; accessed 2015-12-14;  https://en.wikipedia.org/wiki/Star_of_Bethlehem#cite_note-71
Posted by Keith Shields at 8:34 AM